"Ukraine...is more than just the home of 3 million beautiful women"

Truly a country like no other. For seventy years hidden behind the Iron Curtain this Sleeping Beauty suddenly arose with a new breath of life, throwing off the tyranny of her past oppressors and proudly proclaiming herself as the worlds newest democracy. Ukraine's example of determination against all odds has indeed served as an inspiration to freedom seeking peoples around the world.

For the tourist, the openness and warmth of the Ukrainian people is unmistakable. The cultural diversity is refreshing, leaving your senses of life, of humanity, broadened and enlightened. Ukraine's people are as curious about you, as you are about them. After all, it's been in near total isolation for a very long time. For the Traveler there has been no better time to experience first hand the impact that Soviet style communism has left on this Nation of 48 million...

Sofiyivsky Park is a landscape park or Ukrainian state dendrology park “Sofiyvka” of the National Academy of Sciences of Ukraine. It is located in Uman, Cherkasy Oblast of central Ukraine and stretched out on the area of 179,2 hectares. Park “Sofiyvka” is a masterpiece of world landscape gardening art of the end of 18th - the beginning of 19th centuries. Sofiyivsky Park was founded in 1796 by Count Stanisław Szczęsny Potocki, a Polish noble. The park is named after his Greek wife Sofia (Zofia Potocka) to whom it has been given as a gift in May, 1802. The idea to create a park in a romantic style with the help of the Roman and Greek mythology belonged to Sofia.

The cost of the original park was estimated at roughly 15 million złoty! The first and the main architect was Ludwik Metzel, who brought many rare plants from all around Europe.

Sofiyivsky Park is one of the world famous garden-park art creations, preserved to the present time. For almost 200 years it amazes visitors with its outstanding beauty, which includes absolutely wonderful landscapes, exotic plants, antique sculptures, ponds, waterfalls, fountains and a stone garden.

Park “Sofiyvka” was named one of the Seven Wonders of Ukraine on August 21, 2007, based on voting by experts and the internet community. 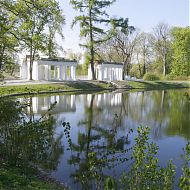 Landscape garden Oleksandria is located on the picturesque banks of the Ros River in Bila Tserkva - the biggest city of the Kyiv oblast. Bila Tserkva was founded as a fortress in 1032 by Kyivan Prince Yaroslav the Wise. Its first name was Yuryiv. There was a mountain in the heart of the town with a castle on it. There was a white church on this mountain as well. In the ІЗth с. the city practically perished after the terrible devastation by the Mongols. There was only the white church left in the burnt to ashes town. This building, made of white stone, served as a reference point in the wild and thick forests of the Ros river valley for a long time. Only in the mid-16th c. the city was rebuilt and got the name Bila Tserkva, which means "White Church". The Church itself has disappeared in the whirl of historic events, and now nobody could even tell how it was ruined. Only some remnants of it have been found on Zamkova Gora (mountain) during archeological excavations in the 20th century.

Do you know where the deepest in the world subway station is?

The deepest in the world subway (metro) station is located in the Ukrainian capital, Kyiv (Kiev)! It is Arsenal’na metro station (red line) and its depth is 105 meters!

Do you know where the center of Europe is?

Do you know which city has the shortest main street?

The shortest city main street, but at the same time one of the widest and the most spectacular is Khreshchatyk Street in the Ukrainian capital Kiev. Its total length is 1,225 meters.

Do you know which language takes the second place in the world on melodic criteria?

Ukrainian language took the second place on melodic criteria after Italian and it was ranked as the third most beautiful language in the world on such criteria as phonetics, vocabulary, phraseology and sentence structure after French and Persian at a linguistic contest held in Paris in 1934.

Do you know who created the world's first constitution?